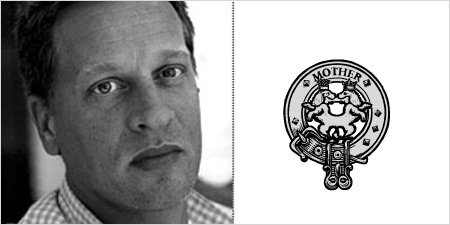 Mark Waites, Founder - Mother Mark Waites目前担任Mother广告的联席创意总监和联合创始人。他早先在伦敦开始自己的职业生涯，在 BMP, Leagas Delaney 和O&M任职。 1992年，他转战纽约，任职几家创意商，并且中间休息了6个月，骑着摩托车从最北部的阿拉斯加横穿美洲大地一路到了南美的最南端 （fantastic action!!） 1997年，Mark回归伦敦，并且和其他四位合伙人共同创办了Mother.在2002年起，Mother连续被评为“年度风云代理商”（ 'Agency of the Year' ），而Mark也和他的创意伙伴Robert Saville被英国《Campaign》杂志评为“年度最佳创意总监”。 When he's not writing ads Mark is the undisputed king of the unfinished screenplay having failed to finish hundreds. A short film he wrote and directed was accepted into over 20 film festivals around the World in 2003 and picked up 'Best Short' in five of them. He lives in London with his wife, Nikki. Mark is to attend the seminar 'Lying, the key to successful third person biographies' some time in February.

Stef Calcraft, Founder - Mother Stef read Biological Sciences followed by a Masters in International Studies at Warwick University, before heading for the City and Big Bang in 1987. Narrowly avoiding Gordon Gekko, he began his career at Unilever working on Persil. Two years later he left and after "finding himself" on a trip around India and Australia, joined Leo Burnett in 1990. In opting unknowingly for a life in politics, Stef experienced the troubled life of the American multi-national working on Kellogg, Kraft and Cathay Pacific. In 1993, Stef finally lost his advertising cherry and joined BBH where he worked for John, John and Nigel. Three years later on, and a lifetime wiser, he founded Mother with Mark Waites and Robert Saville in December 1996. Mother won Campaign Magazine's Agency of the Year in 2001 and 2002, Marketing Magazine's Agency of the Year in 2002, Creative Review's Agency Peer Poll in 2003, 2004 and 2005 and top spot as the UK's most creative agency in Marketing Week's Annual Client Survey 2003, 2004 and 2005. This December Mother celebrates its 10th Birthday, which makes Stef feel very old. Stef lives in London with his wife Tara. 不翻译成中文了,MOTHER的大名你大概有听说过吧
Tags： Leagas Delaney Mark Waites Mother London Ogilvy